Naturascan, a mission to assess the presence and distribution of marine megafauna

There are seven species of sea turtles in the world, three of which regularly evolve in the western Mediterranean: the Loggerhead turtle (Caretta caretta), the Leatherback turtle (Dermochelys coriacea) and the Green turtle (Chelonia mydas).
Sea turtles are migratory. They roam the seas and oceans in search of feeding, breeding and egg-laying areas. This diversity of habitats that they cross only increases the risks and threats that weigh on them.
Since 2012, the Marineland association has been leading the ObsTortueMed conservation program, Observation of Marine Turtles in the Mediterranean. Beyond a surveillance program on the monitoring of populations at sea off the Alpes-Maritimes and the Var, ObsTortueMed improves knowledge on the evolution of the structure of populations and on the identification of specific threats. to a region particularly impacted by human activity.

Naturascan's mission is to assess the presence and distribution of marine megafauna within the Natura 2000 site "Baie et Cap d'Antibes-Iles de Lérins baie". One of the characteristics of this site is to shelter in its offshore extension, canyons reaching more than 1500 meters in depth, conducive to the presence of marine mammals. 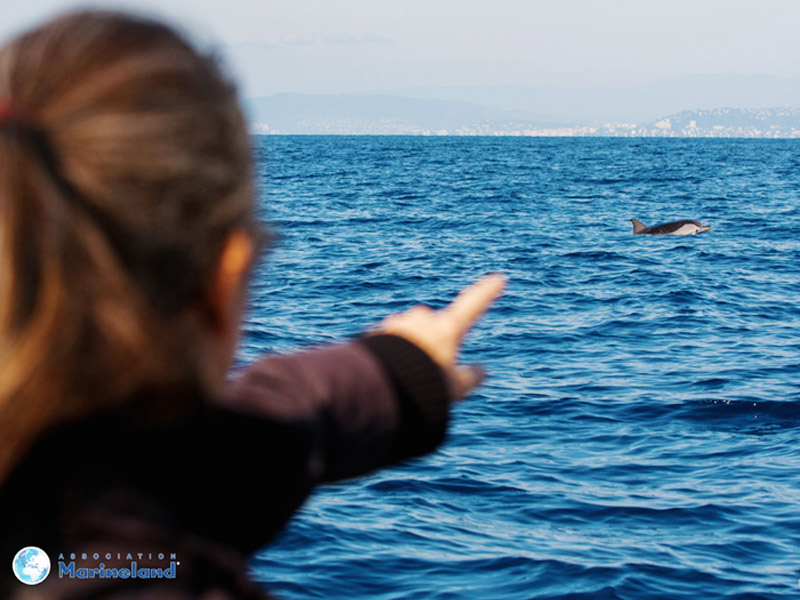 Since January 2020, the Marineland Association, the city of Antibes and the Aquanautes have been committed to bringing this monitoring program to life. Every month, three observers, a rapporteur and a pilot embark on the Haizea, the zodiac of the Marineland Association. 50 km of linear transects, a study area of ​​72.5 km2, are covered and observations are carried out according to a precise protocol, at a slow speed of 6 knots.

Through its monitoring program, Naturascan observation data will enrich the studies carried out within the framework of the Marine Strategy Framework Directive (MSFD) coordinated by the OFB.

In 2020, nine outings were carried out, representing more than 300 km of prospecting effort, i.e. more than 400 km2 "scanned" with a result of 41 observations.

The Naturascan program is renewed in 2021. The group of volunteer observers is growing and nearly thirty people are involved in this monitoring. The training of observers is ensured. The prospecting area is also expanding to include the Lérins Islands area. Two areas, two prospecting protocols, two separate outings. It is thus almost the entire Natura 2000 area that is surveyed each month (target set).