For more than 25 years, Marineland has graciously welcomed about 150 seriously ill children each year to allow them to live their dream! From an encounter with the dolphins to lunch with the polar bears, a day with the sea lions or a special session with the killer whales, the teams at Marineland and Kid's Island are always enthusiastic about welcoming these children and trying to make their wishes come true!

Since 2015, Marineland has also provided financial support to the charity, Little Princes, by participating each year in the charity's Solidarity Day, by donating 50 cents from each visit made on that day in its parks. In 2017, more than €1,800 was donated to the charity.

In 2016, Marineland financially supported the charity, Make a Wish by taking part in financing the charity's Gala Dinner at the Carlton in Cannes for the "Donate a Smile" initiative.

Every year since 2018, Marineland has periodically invited children from the charity, Rencontres Africaines – Association Humanitaire, which brings to France children suffering from diseases that are inoperable in their country of origin due to a lack of technical or financial resources.

"Dreamnight at the Zoo" evenings

Since 2011, the Marineland Association has organised a magical evening each year for hospitalised children from the region. The children are treated like VIPs during an evening organised especially for them and organised voluntarily by the park employees.

Working together with the Fontonne Day Hospital

On a weekly basis for over 20 years, Marineland has been welcoming children with communication and behavioural disorders, in partnership with the Hôpital de la Fontonne in Antibes.

Since 2009, our parks have participated in the "Les oubliés des vacances" (the forgotten holidaymakers) project in partnership with Secours Populaire.

In 2015 and 2017, Marineland actively supported Special Olympics France by funding a team of runners in the Sophia-Antipolis Inter-Company Solidarity Race. The registration fees helped finance this charity for the mentally handicapped.

Marineland organises toy drives at Christmas to collect toys for disadvantaged children from staff and visitors.

In 2016, the park organised a charity day at Christmastime, inviting 1,500 beneficiaries from local charities engaged in helping the most disadvantaged.

Since 2017, Marineland has been working in partnership with the Etablissement Français du Sang (French Blood Agency) to organise several blood drives each year in the park, collecting donations from both staff and park visitors.

Since 2017, Marineland has been collecting its employees' old glasses, along with those left behind by visitors for more than a year, to give them to the charity, Lunettes Sans Frontières which distributes them to clinics around the world.

In 2020, more than a hundred pairs of glasses were sent to the charity. Don't hesitate to contribute by dropping off your old glasses that are in good condition (prescription or sunglasses) at the park's reception desk.

Mobile phone collection for the benefit of the Pour la Vie

Park visitors and staff can drop off their used mobile phones and digital tablets at the reception desk. The components are then recycled by a specialised company and the profits are donated to the charity, Pour la Vie, to finance the dreams of sick children. You, too, can leave your old mobile phones at the Marineland reception desk, so that they can contribute to helping this charity!

In 2018, the park welcomed children from SOS Children's Village in Carros for an extraordinary day with the animals.

Marineland supports the charity, Africa France Solidaire, by entrusting it with its old fleet of wheelchairs to give them a second life.
These wheelchairs are repaired by young people from a vocational high school in Manosque, before being sent to Cameroon as part of a more global international solidarity project that has been running for the past five years, training young Cameroonians from the village of Ebodge in first aid and raising their awareness of environmental protection, including the protection of a Sea Turtle nesting area. The circle is complete!

Partnering with the Isatis Association

Marineland regularly welcomes beneficiaries from the charity, ISATIS, whose aim is to support people with mental health problems. Marineland hosts them for a work placement as part of their employability project

Since 2019, Marineland has been inviting the educational institutes of the Alpes Maritimes and specialised charities for a day of discovery at Marineland to celebrate International Autism Awareness Day. On this occasion in 2019, the park's employees showed their support by wearing the colour blue, the symbol of autism. #Tousenbleu

Raffles for schools and charities

Marineland offers invitations to its parks to local schools and charities every year. Each year, more than 3,600 invitations are offered. 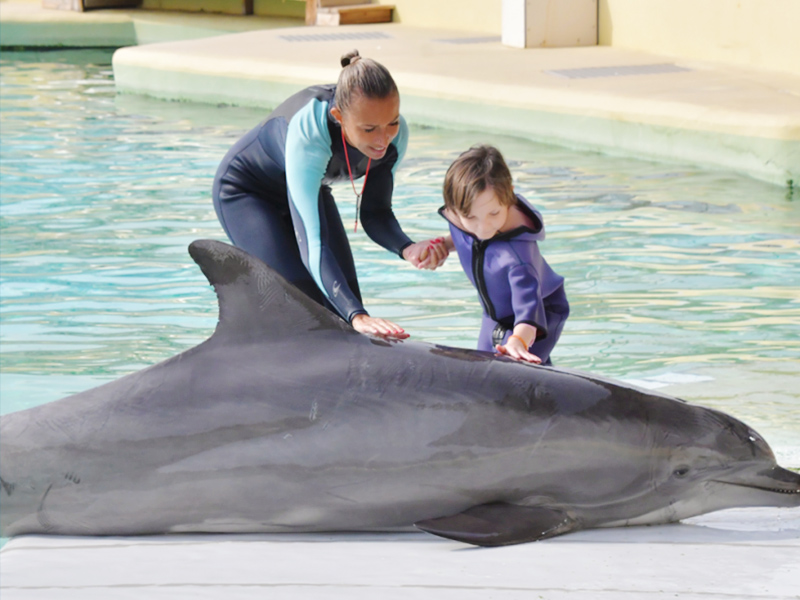